When Karen Rile, senior and founding editor of Cleaver Magazine asked for one of her editors to represent Cleaver at Philly Lit’s annual fundraising Adult Spelling Bee, I didn’t hesitate, I was confident; I was a good speller, I’d won my seventh-grade spelling bee.

However, as the event drew near, I began to have doubts. Would I clutch when I stood in the spotlight at the microphone, all eyes upon me as I scanned my (late) middle-aged memory for the familiar word, or searched those little grey cells for the rules of Latinate or antique spellings of the more arcane?

What had I been thinking when I’d volunteered?

Thus, it was with a nervous, unsteady heart that I stepped through the door of The Monkey Club, the host venue of the spelling bee, an affable, self-described “dive bar” with an upstairs events room in the Kensington section of Philadelphia that regularly opens its doors to local literary activities.

I waded through the Friday night crowd and found the people from the Backyard Writer’s Group and The Head and the Hand Press, the groups that sponsored the event, paid my ten-dollar registration fee, and pulled a sign over my head featuring an intimidating illustration of a cleaver.

Older and probably not wiser than most of the folks at the bar, trying to get my bearings in the sea of young faces, I waded back into the fray and found Tracey Levine, writer, friend, professor at Arcadia University, who that night was representing The Hatchery, a group that hosts a weekly writer reading series at the Monkey club together with the Head and the Hand, a small, local publisher that sponsors a writing workshop.

“This is Miriam, from Cleaver,” Tracey announced to her Hatchery friends, eliciting a round of good-natured jibes about our signature use of “thwack” in our correspondence with writers and our unfortunate, but typical habit of rejecting most of their submissions. All in good fun, and they hastened to add that Hatchery Jeremy, whom I was delighted to meet, had escaped the cleaver and was going to be published in our June edition.

It would have been nice to continue to hang with the Hatchery but soon it was time for the event to begin. Seven teams of two (except for Cleaver and Qwerty) would compete for a $200.00 prize: the Backyard Writers’ Group, The Hatchery, The Head and the Hand, Qwerty, Amalgam, The Liar’s Club, and Cleaver. We would follow the rules of the National Spelling Bee, which meant that we had to say our assigned word, spell it, and say it again. If the first member of the team spelled their word correctly, they had successfully completed round one. If that person misspelled their word, the second person on the team had another turn.

There would be three rounds: the first, Head and the Hand’s Nic Esposito explained, would feature random semi-difficult words; the second, themed “primate,” and the third, themed “space,” were more advanced. After that, with the teams still standing, back to random words, this time, really tough ones. Words I’d never encountered.

My position, at the end of the bench, which was also the front, meant I would go first.

That was easy. I spelled ‘liaison’ without hesitating.

Great! Cleaver had made it through round one. We’d almost lost a contestant to ‘supersede,” which, it turns out, has an alternate spelling: ‘supercede.’

“That’s how I’ve always spelled it,” I whispered. My blood rushed, my heart pounded, I was in the game.

Round two didn’t go so well for me. ‘Proboscis’ was my first word. I’d forgotten the last consonant and substituted a ‘u’ for an ‘i’. But, because I was really playing for two, I got another chance. This time, I spelled my word correctly. “Hominid.” The audience clapped, they whooped. Some unknown but loud number of people was rooting for me.

On to round three and ‘Space.’

“’Solstice,’” he said. I knew that one. I pronounced it, spelled it, then pronounced it again. Someone in the audience gasped. Then they clapped, they roared, they whooped some more.

By now, though, people were falling away and at the end of the third round, four teams remained. Cleaver, with the others, would advance to the finals.

Again I was first. The audience chanted as I walked the few steps to the microphone. Cleaver, Cleaver. I hoped I wouldn’t disappoint.

What? I knew the word well, but I couldn’t remember if it was spelled with a gri or gre.

“Could you repeat the word?”

Poor Nic. I made him say it again. I asked him to use it in a sentence, hoping those little grey cells would kick in, buying more time.

But wait – I hadn’t said the word a final time. This meant I could try again and I did. Well, this didn’t seem fair, but rules were rules and I wanted to win. It was embarrassing, but, mea culpa, I liked competing.

Finally, it was down to me, Cleaver and Jon McGoran and Merry Deedee Jones, of The Liar’s Club.

I phumphed on ‘chiaroscurist,” but Jon had gotten his word wrong, and so I had another chance.

It was after ten. We’d gone back and forth so often it was becoming apparent that we’d be there all night. “How about the two remaining teams split the prize?” Nic said.

I wanted to win, but I was very happy to tie. I had been rooting for each and every contestant, I’d been sad when they’d dropped out, I’d been holding my breath, rooting for Merry Deedee as she’d sounded out her last word.

And so had everyone else in the room. 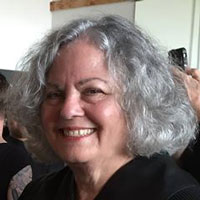 Miriam Camitta is a writer, teacher, and folklorist. She earned her MFA in Fiction from the Bennington Writing Seminars and holds a Ph.D. in Folklore and Folklife, an M.S. in Education, and a B.A. in English Literature from the University of Pennsylvania, where she taught for thirty-one years. She currently teaches literature and creative writing at Temple University. Her documentary, Crosstown, was nominated for best independent documentary at the 2001 Philadelphia Festival of World Cinema and was broadcast on WYBE-TV. Miriam Camitta writes short fiction, poetry, and memoir and is working on a novel about gentrification and highway planning.

LIFE AS ACTIVISM originated from a need for action, protest, and solidarity. We began this feature seeking works with the …

On Cleaver’s five year anniversary, we continue to celebrate with interviews featuring our senior editors. Grant Clauser is the Poetry …

Melissa Sarno is the YA Book Reviews Editor for Cleaver Magazine. As one of the preeminent voices in young adult …